Things never turn out the way we expect them to and Throttle Time at Monticello Railway Museum was just another example of this. Don't get me wrong... it was great fun for Chuck and he seemed happy to have the opportunity to operate the Illinois Central 8733 which is a 1980 EMD built GP-11 diesel locomotive currently in the MRyM collection. But it wasn't the Milwaukee Road NW-2 #1649 that he really wanted to get his hands on and that was a disappointment for me because this was my present to Chuck. 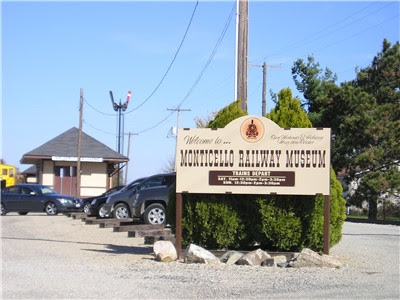 It was a beautiful day to be at Monticello Railway Museum
just outside Monticello, Illinois on Sunday, Nov. 4, 2007.
When I spoke to the museum representative on October 30th, he was very clear that there had been problems with the #1649 but he was pretty sure it would be in operation by Sunday, November 4th. The problems continued and so we were left with the IC #8733 for our Throttle Time adventure. It's just Murphy's Law in effect as usual. 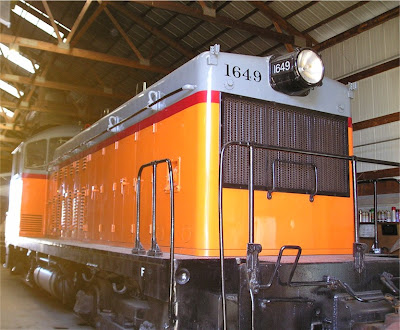 We arrived shortly after 9:00 AM as we had been told to report by 9:30 AM for Chuck's scheduled Throttle Time at 10:30 AM. No one else was at the museum when we got there so we roamed around near the depot and took a few images of the rolling stock and each other. 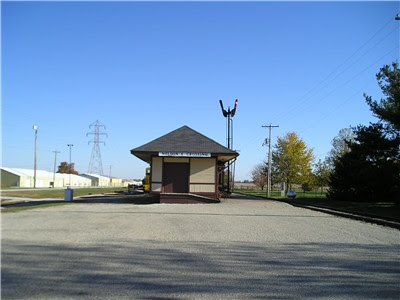 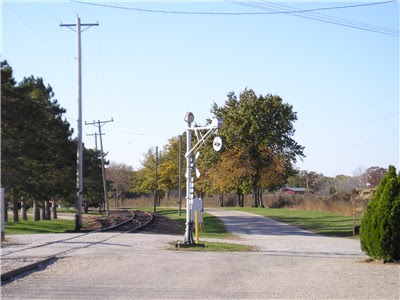 The wig-wag on the south end of the main museum parking lot. 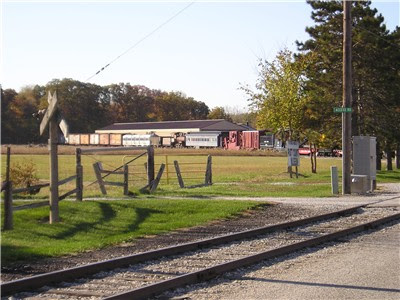 Looking southeast toward the museum barns and yard. 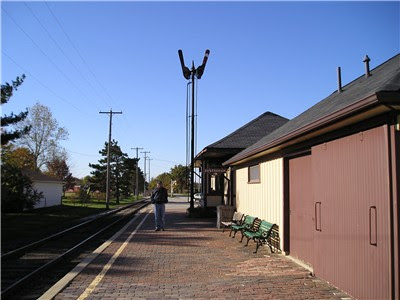 Chuck on the platform to the east of the railway museum depot. 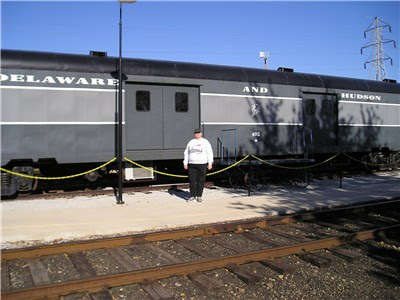 Me in a Milwaukee Road sweatshirt standing north
of the platform by the walk-through display cars. 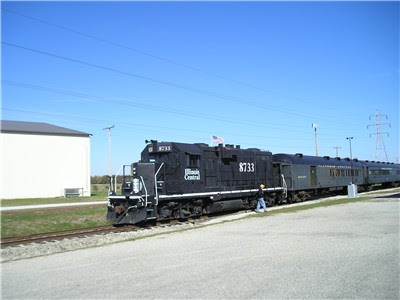 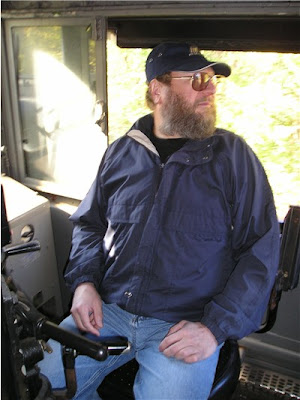 Chuck at the controls of the Illinois Central #8733.

The video I captured during Chuck's Throttle Time operation has been broken down into 7 clips and is being uploaded to my YouTube. As of right now there are 5 clips available. The rest will be up soon. Other videos will follow of our roam around the museum grounds.

After Chuck's time was up one of the museum crew took our picture on the front end of the #8733. 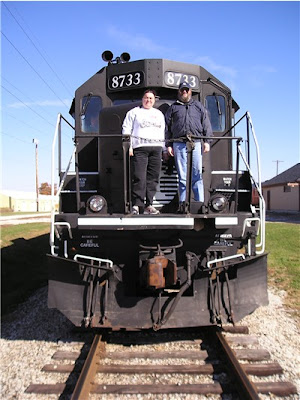 Happy railfans after completing Throttle Time.
It was so windy my hat blew off!

Chuck bought a few trinkets in the museum gift shop and then we headed over to the barns to see the Milwaukee Road NW-2 #1649 sitting inside as depicted above. We toured the yard and the viewed equipment inside and out. Although the museum was closed for the season we were able to roam around at will since we had participated in Throttle Time. 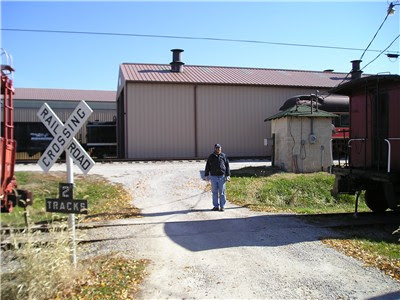 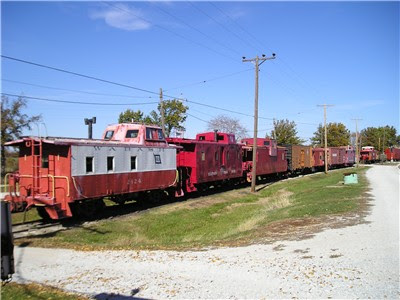 The caboose train to the west of the barns. 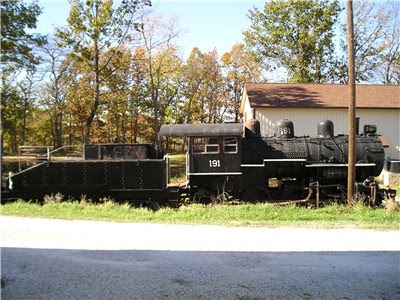 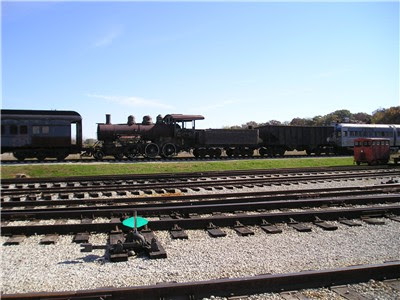 More equipment sits outside in the small museum rail yard. 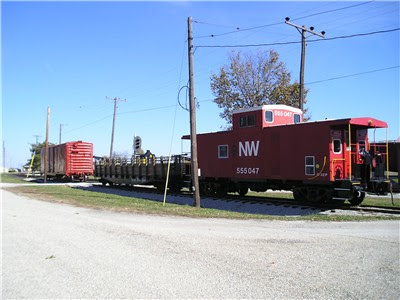 So much of their rolling stock is in excellent condition. 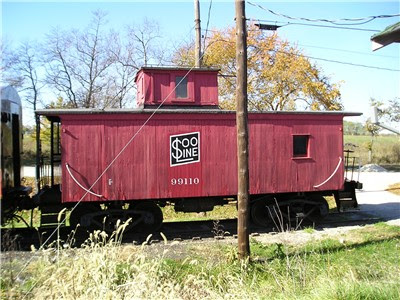 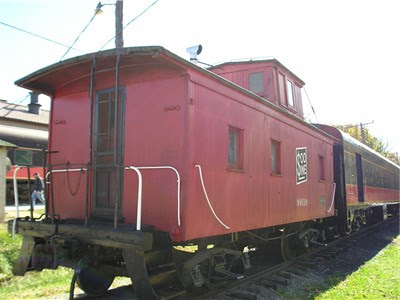 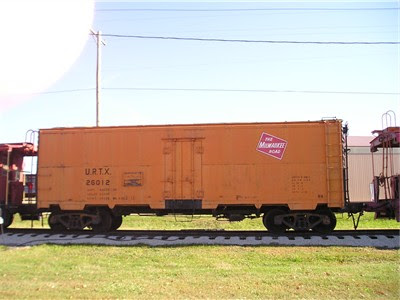 A beautiful Milwaukee Road boxcar looking good
even with my finger in the image. Sorry about that!

So another great weekend trip from our home near Milwaukee has concluded. We started out with a drive to IRM to drop off a CD for a fellow volunteer and then headed to Rochelle, IL to meet up with our good friends Chuck and Jane.

It was another 2 hours or so down to Monticello where we stayed at a Best Western very near the museum. On Sunday it was just short of a four hour drive home by the toll-way around Chicago. We listened in astonishment to the Green Bay Packers' victory over the Kansas City Chiefs; what incredible luck they had! All in all, it was a very good weekend.

Posted by Wisconsin Railfan at 11:35 AM No comments: