The Illinois Railway Museum near Union is doing something new and freakish this year. For the month of October a new event has come to haunt us all...

As of this post there are only three more opportunities for you to check out this newest local fright fest at the Illinois Railway Museum but you can get all the details online.
Chuck and I are not the sort of people who typically attend Halloween haunted houses but because we both volunteer at IRM and we love the idea of using otherwise unused rolling stock for something fun at the museum, we made an exception and went through Terror on the Railroad after working last Saturday, October 20, 2007.

By the time we got in line at around 6:45 PM there were already over 100 people there! So be advised this is a popular event even though it's new. Come early and plan to wait for your turn to be scared! We were in our car heading out the gate at just after 9:00 PM so it took two and a quarter hours for us to make it through the Train of Chills and the Screamliner.

We weren't in a huge hurry though so I think you can be safe if you plan on spending two hours there for your $10 admission fee. At least one hour of that time will be spent waiting for the trolley or the train but the volunteers at IRM are working hard to make sure everyone is as comfortable as possible and, above all, safe.

I was able to visit with the actors prior to the start of the evening's festivities on Saturday and captured a few images to share here. The event coordinator is Jennifer Kolanowski who is also the museum store manager. She has put together an amazing crew of volunteers from both the regular museum volunteers and the local communities.

Of the actors I met, one was still in high school, several had just graduated in 2007, and a couple were in college but all were from Marengo, Crystal Lake, and Woodstock. Jennifer told me a group of 30 kids from the Honor Society in Huntley were going to be there to do community service volunteering later that evening. It's wonderful to see a strong volunteer spirit in the local youth around Union. And it looks like a real blast for them!

As the first crew of volunteers were putting on their make-up I was able to take a few pictures and talk to the kids. The diner was used as their make-up room and then they could go outside to wait for the cover of darkness to scuttle off to their scary assignments. There were many others I did not have an opportunity to meet but they all did a great job of scaring me! 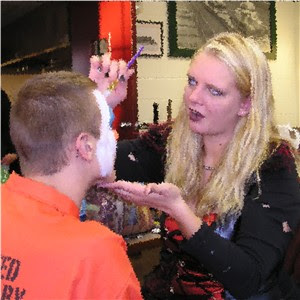 Kim Durkin, a 2007 Marengo graduate in her costume. 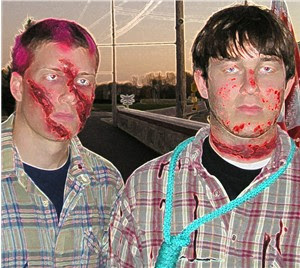 Will Senneke attends McHenry County College while Matt
Jakymiw is a student at Milwaukee School of Engineering.

Nick Andersen, Class of 2007 at Marengo,
holds Nenshouhi ready to rip into some fun. 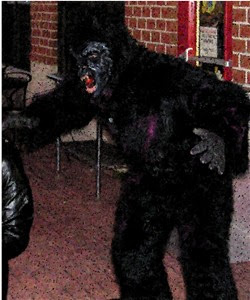 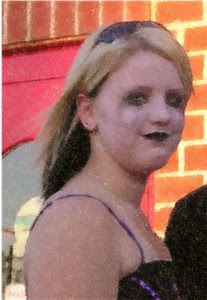 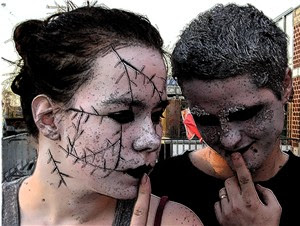 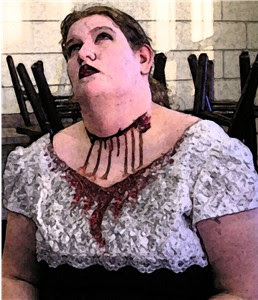 Cathy Walters told me her job was to
hide in a doorway and scare people!
If you get the chance to get out to the Illinois Railway Museum over the last three days of the event I don't think you will be disappointed in the performance of these fine actors. But what you may not realize is that they also helped to construct the interior scenes in the Train of Chills and decorated the Screamliner just to help you get your annual dose of Halloween gore.

If you are one who loves to get scared or simply grossed out - you don't want to miss this!
Posted by Wisconsin Railfan at 12:59 PM No comments: