When we arrived at Rockside Station, the main passenger boarding point for the Cuyahoga Scenic Valley Railroad, there were only a few people. The fog was still heavy in the valley beyond. 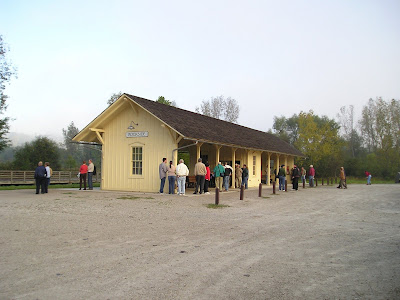 Our departure time was scheduled for 9:00 AM but we arrived about 8:20 AM. Over time the crowd grew in anticipation of the train ride to come. 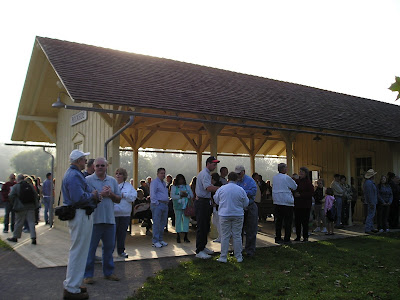 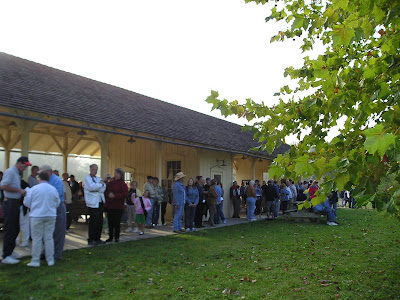 Boarding was to begin 1/2 hour before departure but the train arrived just before 9:00 AM. Everyone boarded and we were on our way shortly.

The Saint Lucie Sound car was very nice. There is seating for 18 people in the observation area, three private rooms with toilets and sinks, a bar area and lounge. 10 of the 18 people on this trip were there because one of them had won 10 tickets in a charity auction. They were all locals so this trip was a real lark for them. I don't think they were really railfans, but they seemed to have a lot of fun amongst themselves. 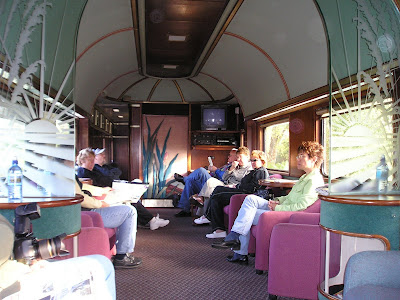 The engine was pulling the train south and was hooked directly onto the Saint Lucie Sound car all the way to Canton. We were sitting in a little area at the back of the car with seating for 8 on four roomy love-seats. Our traveling companions back there were railfans from IL and OH. Well, more precisely, the men were railfans and their wives were there to share the ride. They were a lot of fun though, and we talked about a lot of things that had little to do with trains.

A three hour layover in Canton was planned with a choice of tours available. Chuck and I went to the Canton Classic Car Museum and our immediate seating companions all went to the Pro Football Hall of Fame. We had visited the Football Hall of Fame a few years ago. The 10 in the forward section beyond the etched glass partitions all went to a bar for the entire time.
Posted by Wisconsin Railfan at 8:22 AM No comments: